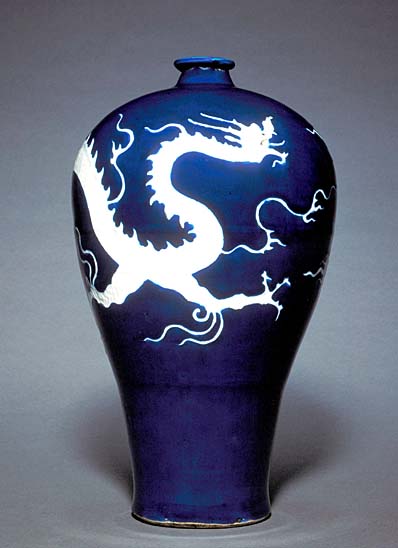 This vase offers an interesting and rare example of Yuan ceramics. There are only two other known examples, one of which is in the Beijing Imperial Palace. Its refined form, curving out at the shoulder from a narrow base, and its fully coated surface are features associated with traditional Song (960-1279) models. The delicately engraved dragon encircling the belly has been painted with a slip of clay and water. Its forcefully-drawn contours, slender muzzle, long, sinuous neck ending in a small head, its dorsal crest and its triple-clawed paws are typical of the Yuan period, as is the use of an intense, shimmering cobalt blue. This vase may well have been destined for official use.

The high kaolin content of the porcelain enabled it to be fired at 1350o C to obtain an incredibly hard ceramic body of a pure white. Along with copper red and iron, cobalt is one of the only pigments that can withstand such high temperatures and it thus became established as the colour par excellence for this type of ware. The white porcelain from Jingdezhen featured a smooth coating. The exceptional resources of Jingdezhen, which was both rich in kaolin and close to southern ports, were to be decisive factors in its future expansion.

The Yuan period marked the development of porcelain exports to South East Asia, Japan and the Near East. The Mongols brought economic impetus to the sector, introducing such measures as concentrated production and rational organization of labor previously unknown in the 14th century. The combination of cobalt blue and porcelain gave birth to a celebrated technique that led to a boom in Chinese ceramics, ultimately turning them into a national symbol.