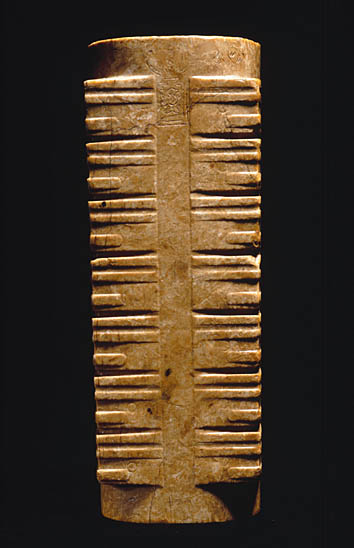 The square outer section of this piece encloses an empty cylinder. At the corners of the interlocking square and circle is a series of seven diagrammatic masks, the precise meaning of which remains uncertain. Although it might formally derive from ornaments such as tubular pearls or bracelets it was nevertheless intended for ritual use. Such pieces have most often been discovered along with jade bi discs representing Earth and Heaven. The cong itself was not merely a talisman but an efficient means of communicating with higher forces and of warding off evil powers. Its use was related to a clearly defined social context, that of the Shaman.

This piece is the result of the immense effort involved in jade working. In a period when metal tools did not exist, jade an extremely hard material could only be fashioned into the desired shape by abrasion, grinding and milling.

In China, jade was regarded as more than a mere raw material. It came to symbolize the metaphysical preoccupations of the Neolithic ruling elite. Cong have been discovered in the tombs of high-ranking figures in the Liangzhu culture, probably temporal and spiritual leaders whose role must have combined that of sorcerer and clan chief. Jade objects from this culture are distinguished from those from the Hongshan culture (3500-2500 BCE) in that they no longer only possess a magic function but are apparently also designed to assert authority. The specific formal interplay of the circle encapsulated within a square was to provide a potent legacy in the following centuries. This motif would reappear in architecture, for example in the formal configuration of Mingtang under the Han dynasty.