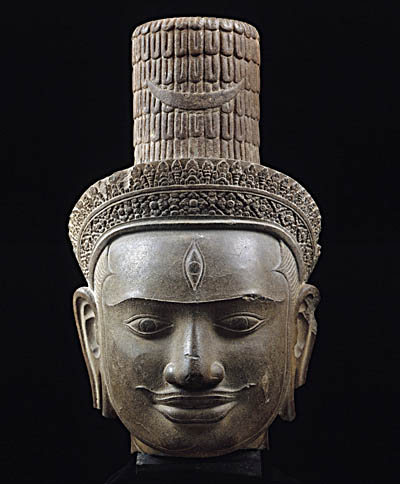 The Hindu deity Shiva is easily recognizable by the presence of a third eye on his forehead. The hairstyle that frames this somewhat unnatural face, with its simplified, clearly defined modelling, falls in a straight line from the temples down to the beard; the lips and eyes are highlighted by carved incisions, while the beard and hair are represented by light studding and fine grooves, and the eyebrows form a sharp, unbroken arch. This type of total facial stylization and marked delineation is specific to the Bakheng style from the late 9th and early 10th centuries and gives its statuary a certain coldness and geometrically hieratical appearance. Yet here, the ultimate effect is to impart the sense of Angkorian grandeur, while the faint smile, emphasized by the slim moustache, conveys an expression of benevolence.The work was destined for the central shine tower of a Shivaite temple erected on the summit of the phnom (hill) Bok near Angkor. The Bakheng style developed under the reign of Yashovarman I (889-910) -founder of the original Angkor, in the centre of which he built a massive, towering temple dedicated to the cult of the linga, symbol of Shiva, the most venerated deity of the Angkorian period- and endured down to around 925 before the emergence of the Koh Ker style which favoured gigantism, movement, and more natural, sensitive modelling.