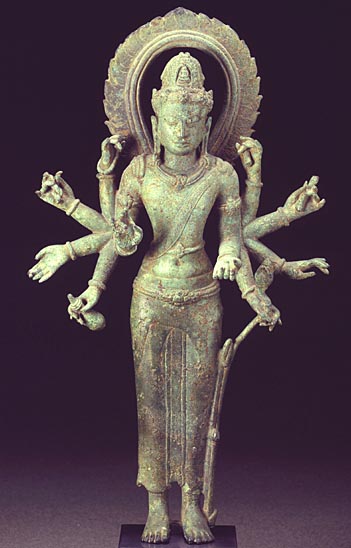 This statuette, its face immersed in deep introspection, represents Avalokitesvara, identifiablethanks to the figure of bodhisattva is rare. Some of the figure’s arms are making symbolic mudra gestures while others hold the deity’s characteristic attributes: rosary, lace, water pitcher, book, a broken object that may have originally represented the elephant tooth or the triple staff, and pink lotus. With his two foremost hands, the bodhisattva is perhaps performing a variant of the mudra of teaching. The other hands free of attributes seem to be making the symbolic gestures of the mudra of giving, and of absence of fear. As is often the case with figures of deities, the head of the bodhisattva is encircled by a halo of flames. He is wearing the Brahmanic chain as well as rich, but unobtrusive, gold jewels. The tiger skin girding his hips reveals the influence of Sivaite iconography on that of mahayana Buddhism, an influence particularly perceptible in Indonesia. The statuette displays the characteristic hallmarks of Middle Java art with its soft, sensitive modelling, also found in the friendly, smiling faces of the bas-reliefs at Borobudur.

The bronze was cast using the cire perdue technique. The original plinth no longer survives, and the statuette formerly had a protective parasol.

From the 5th century CE, Java’s position on the maritime trade routes favoured the gradual introduction of Indian culture. This work belongs to the so-called « Middle Java » period (which owes its name to the fact the seat of power was located in the central part of the island) and is thus contemporary with the celebrated Borobudur, the key Javanese monument.