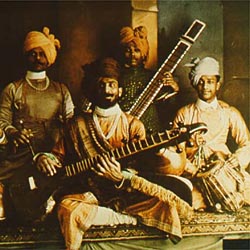 History of the Sound Archives Department

The Museum’s music section was officially established in 1933 at the instigation of Mr. Philippe Stern, at the time Assistant Curator. Well aware of the inevitable process of acculturation already affecting some of the most ancient Asiatic musical traditions, Philippe Stern decided to conserve their tenuous existence for posterity by creating a sound library specifically designed for this purpose. The sound archives consist of a unique collection of some 1800 78rpm records, 1000 33rpm records and 500 tapes of original recordings made by various ethnographic missions in the 1950s.

Among the most valuable items are 180 78rpm records cut during the Colonial Exhibition held at Vincennes in 1931, a complete collection of 160 78rpm records produced in 1932 on the occasion of the first Arab Music Congress in Cairo, two series of over 700 78rpm records devoted to the Chinese Opera, Philippe Stern’s own private collection, and the original matrices for the recordings of Sanskrit and Japanese Buddhist liturgical recitations made in 1934 thanks to an anonymous donation.