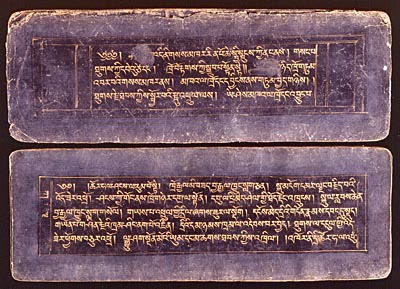 This manuscript of a work by rMa-ston srol’jin (1092-?), dealing with ritual, consists of 161 oblong folios with 5-line texts on either side of each page written in gold ink on a 6.5 x 28 cm black ground. The folios have a protective cover and the flat outer cardboard surface has a hollowed-out cartouche on the back with its own protective fabric net. On either side of the cartouche, two syllables are noted in lantsa script. The lower surface consists solely of a blank sheet. The whole manuscript is held between two crude, red-tinted boards.

The piece perhaps comes from the Bru family, natives of Gilgit, who settled in Tashilhumpo and into which the 2nd and 5th Dalai Lamas were born. The family died out in the 19th century and the library was dispersed.