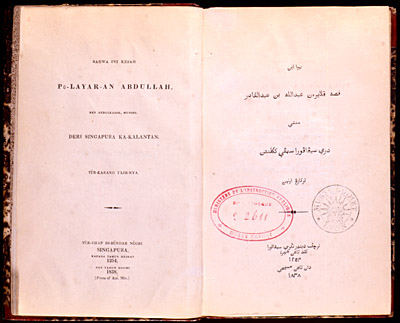 This work, an original edition with a period red leather half binding, was printed in 1838 (Hegira 1254) in Singapore on the presses of the American Mission.

The author, a writer nowadays regarded as the father of modern Malay literature, recounts the journey he undertook in 1838 on the eastern coast of the Malacca peninsula (South Indochina) where he was employed as an interpreter. He was acquainted with Stamford Raffles, founder of Singapore (1819), and was also connected to American Protestant missionaries for whom he worked at the printing works they had set up in Singapore. These texts were translated into French by Edouard Dulaurier, who held the first chair in Malay, established in 1841, in Paris at the Ecole spéciale des Langues orientales.

The text is meticulously printed on machine-made paper using the Roman alphabet on the left and Arabic (Jawi) script on the right. This first edition of the work is moreover one of the oldest books printed in Singapore.