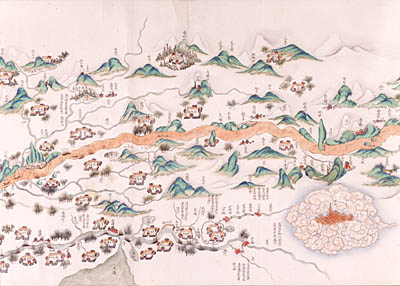 General map of the Yellow River and Grand Canal

This map charts the course of the Yellow River (Huang he), its source, mouth, and tributaries, as well as mountain ranges and cities. The river’s source in the Kunlun mountains features on the right-hand side of the beginning of the scroll, together with the canal linking the Blue River with Beijing. Each city is symbolized by a crenellated wall, while the mountains and bridges are indicated in the conventional fashion then in use, although in a fairly pictorial manner. The map places the river’s mouth much farther south than its present-day location. This can be explained by the major changes in water levels undergone by the Huang he throughout its history. It also reveals that the map was drawn up before 1851, the date of the catastrophic flooding which brought about the radical alteration in the river’s course.

The map consists of an 11-metre long scroll covered in a silk brocade with small hexagonally inscribed swastika motifs.

It was brought back from China by the diplomat Arnold Vissière (1858-1930) who became professor of Chinese at the Ecole nationale des Langues orientales and who had built up a private collection of Chinese maps.