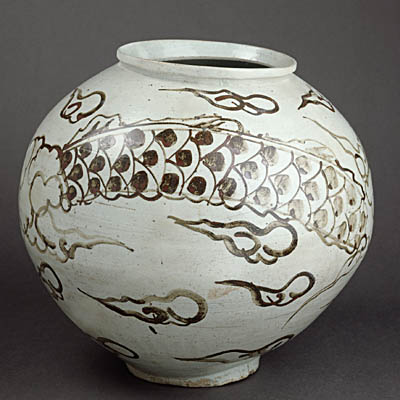 The decoration here depicts a dragon lost in the clouds-a theme introduced from China and a commonly found feature in works by scholarly and professional painters. The frequency of its use in the 17th century points to a specifically Korean graphic concern, perhaps indicative of a preoccupation peculiar to a period that witnessed a gradual diversification in the demand for ceramics. Accordingly, potters drew their inspiration from scholarly painting where the naturalist style was combined with purely formal exploration of line and space, revealing an astonishing virtuosity.

The almost instinctively buoyant and unaffected graphic treatment of the dragon by 17th century Korean ceramists can be distinguished from the more vigorous approach that had been adopted by Chinese painters of the Song dynasty (960 – 1279). Here the subject is treated with considerable freedom of expression, even with a certain touch of fantasy that enlivens the interplay of lines and energetic, flowing forms. The object also illustrates the transition from the earliest Punch’ong ware-frequently characterized by a high degree of modernity-to the much more realistic motifs, influenced by Academic painting , to be found on pieces from the late Choson (1392-1901) period. This jar decorated in a blend of fantasy and abstraction stands out as one of the finest specimens of this type of pottery.

17th century Korean craftsmen applied a distinctive decorative style-already evocative of painting-to this type of white ceramic with its Confucian restraint. Improved techniques, such as the mastery of iron oxide brown decoration, left room for purely decorative exploration that in itself heralded future stylistic evolution.