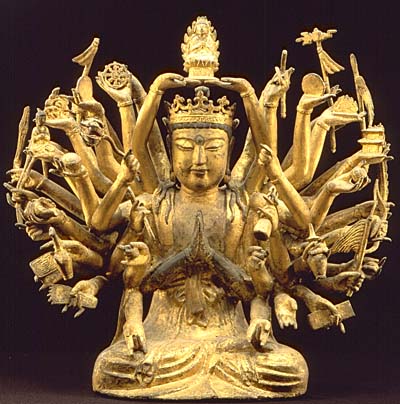 This impressive cast iron piece, complete with its original gilding, represents the image of the « thousand-armed, thousand-eyed Avalokitesvara » chonsu kwanum posal. Seated in the oriental posture, the 43-handed entity (each hand with a different attribute) appears to be gently bowing at the feet of a small Amitabha Buddha held over his head by two of his upper arms. Here, the bodhisattva is wearing a princely crown, decorated with fleur-de-lis, derived from an older model already well known at the time of the Kaya kingdom (1st-6th century CE). The large face with its rather narrow forehead reappears on stone statues of typical 10th-11th century workmanship.

This particular Avalokitesvara iconography came directly from the repertoire of Tang dynasty China (618-907 CE) like those featured in the decorative wall paintings in the Dunhuang caves.

Avalokitesvara was in fact the representative bodhissattva of the « Buddha of Light », the « Buddha of Infinite Life », in the paradise into which all hope to be reborn. He interceded on behalf of this Buddha, who enjoyed increasing popularity at a period that lay under the shadow of the Mongol threat. According to the calligraphy inscription on the wooden plinth, the statue came from the temple of Tongbang-sa, founded at the time of the Unified Silla (668-935 CE), and particularly active during the Koryo period (932-1392 CE). It is the only known Korean specimen of a sculpture in the round from such an early date to depict this particular image, although the iconography was already apparently in vogue in China under the Five Dynasties (907-960 CE). The statue is therefore a reminder that esoteric Buddhism, originally characterized by Hindu imagery, subsequently developed along lines that progressed logically from Tang China to Heian Japan (794-1185 CE) via Koryo Korea.