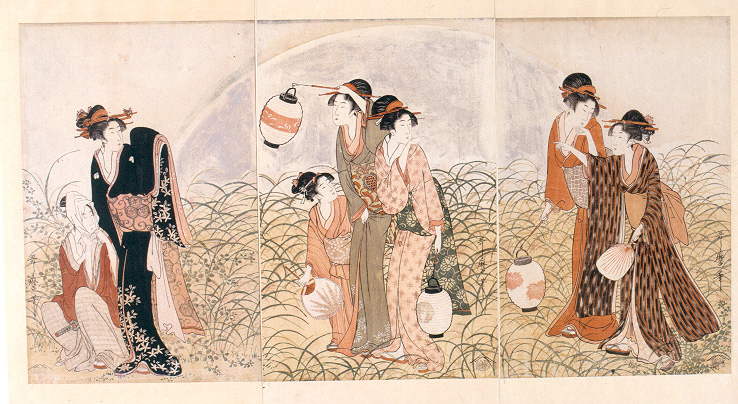 These three prints depict an episode from the Tale of Ise (Ise monogatari), in this case the flight of the illicit lovers. The couple, hiding among the reeds in the Musashi plain, is lit by the rising full moon, magnificently represented in pulverized white mica. This particular scene shows the discovery of the loving couple by the provincial governor whose henchmen are replaced by five women holding lanterns on the two adjacent prints. These female figures, with their enchantingly palpable sensual beauty are typical of Utamaro’s style, which is imbued with highly refined psychological awareness. He succeeded in proposing a new feminine ideal: slender, haughty and sedate. Besides idylls set in natural surroundings he also dealt with such themes as celebrated loving couples, portraits of courtesans, and erotic visions of the Yoshiwara (the Edo « pleasure quarter »).

The 1790s marked a turning point in the development of ukiyo-e (paintings of the « Floating World »): the polychrome print achieved supreme technical perfection as a result of successive printing onto the same proof of several woodblocks with different colors of ink. From 1765, these woodblock prints, with their varied thick colors and embossed paper that brought life to the areas of white, were known as nishiki-e (brocade pictures).

Around 1790, Utamaro emerged as the leading figure in the ukiyo-e movement. Right from the beginning, this style captivated the Japanese people and it blossomed during the Edo period, a great, middle-class inspired revival, but one that flourished within the context of a civilization that had been brilliantly cultivated by the aristocracy, the military class and the clergy.