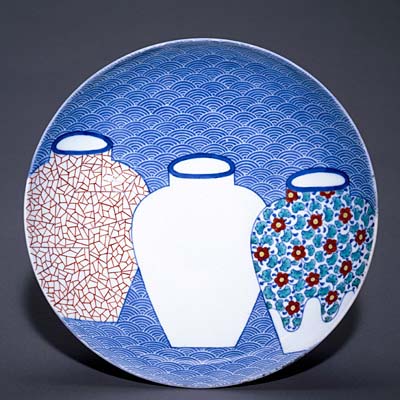 This dish sara has a gently rounded curve and stands on a high base. It has a classic form known as « wooden base bowl ». The exterior of the base was frequently decorated with a « comb-shaped design » Kushijo consisting of regularly spaced vertical lines. The jar motif is symmetrically repeated three times sanpô moyô in a typical Nabeshima fashion displaying extreme refinement and a distinct decorative layout. Such features adopted stylistic guidelines laid down around 1680, paving the way for an esthetic canon specific to this type of ceramics. The profound feeling for nature, daring compositions and choice of color ranges that are also characteristic of Nabeshima prints are deployed with matching talent in the porcelain ware. This included several genres, distinguished by the type of coloring agent or glaze employed. The polychrome decoration represents the most refined Nabeshima style, involving the use of blue, green, yellow, and red which was reserved for the principal (often floral) motif.

Nabeshima production displayed great expertise in formal execution and called for the use of carefully selected materials. The pieces were created in a series of stages. The outlines of the motifs were drawn in cobalt blue and coated in glaze. After an initial firing at 1350°C, these motifs were then infilled with green and red enamels under a second coat of glaze and given a second firing at around 850°C.

Nabeshima ware is the most accomplished form of Japanese ceramics. Indeed, according to 19th century documents, such pieces were never sold or exported but reserved as gifts for high-ranking Tokugawa dignitaries.