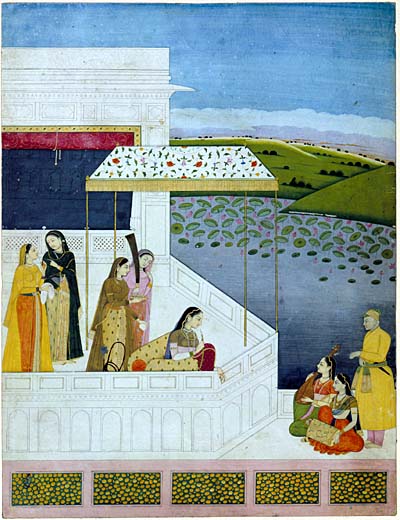 This miniature in the Guler style is a graceful, sensitive evocation of a young queen, shown leisurely smoking a narghile while dreamily listening to two female musicians. In a highly poetic vein, it attests to the Upper Punjab artists’ taste for intimist scenes, at the same time illustrating the essential qualities of Guler art in which women are depicted as exquisite, delicate creatures, a feminine ideal characteristic of the celebrated Kangra style. Both the Guler and Kangra styles were attached to amorous themes involving secular scenes or the loves of Krishna.

The closing centuries of Indian art (16th-18th centuries) were characterized by a major development of album painting and a profusion of distinct schools. From the 16th century down to the 18th century, the « Great Mughals » dominated all Northern India. These glittering Sunnite Muslim emperors presided over a highly refined art form that coexisted with other, more authentically Hindu, painting: illustrations of the great classics of Indian literature, or portraits of sovereigns and their entourages. In the Punjab, « Pahari », or hill painting flourished from the mid-18th century.

This work belongs to the production of Rajput pictorial schools that were already displaying strong Mughal influences. These were to intensify after the sack of Delhi in 1739 by the Persian Nadir Shah. Indeed, many artists who had adopted the Mughal tradition left the capital and moved to principalities in Rajastan, or to the foothills of the Upper Punjab. Their arrival introduced changes to the esthetic conventions of abstraction and idealization in Rajput painting, and enriched the latter with a renewed thematic repertoire. This was precisely the case with Manak who sought refuge in Guler in 1740 and to whom this work is attributed.