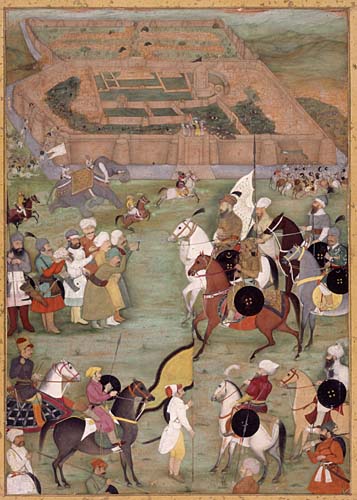 The Surrender of Kandahar

This miniature depicts the surrender of Persian troops- seen on the right, on horseback or on foot-handing over the keys to the city to Kilij Khan whose haughty silhouette appears on the left, mounted on a white steed and wearing a black-plumed turban. The panoramic tableau- heightened by the plunging view over the city that creates an open-air atmosphere- is uncommon in Mughal painting. The painting is typical of the finest productions from the imperial workshop around 1640. The composition includes separate, symmetrical registers, skilfully rendered in a subdued vein. The upper background of this extremely well organized painting shows a citadel-probably Kandahar-treated in casually expert perspective. The surrender scene itself takes place in the foreground, and is inscribed in a virtual square, vertically subdivided into two parts.

Shah Jahan (1628-1658) was doubtless the most splendid of the Mughal emperors. The sovereign’s Official Chronicle, or Padshanama brimmed with illustrations by the greatest imperial artists. Certain miniatures (including this one) were in all likelihood removed from the manuscript in the 18th century. This page, depicting the surrender of a city- probably Kandahar- is one of the most interesting paintings in the chronicle. It provides a pictorial account of a key military event which took place in 1637-1638 under Shah Jahan’s reign. The great Afghan fortress of Kandahar, commanding a strategic position on the road to India and a hub of trade, was bitterly fought over by Safavid Persia and the Mughal Empire in 1595 and 1622. In 1638, Shah Jahan again forced Kandahar to surrender but the city was definitively re-annexed by the Persians in 1653. The manuscript of the Padshanama is today in the collections of the Royal Library at Windsor Castle.