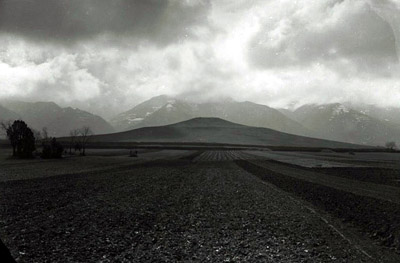 The Mausoleum of the first Emperor, Qin shihuang

The significance of this site where, sixty years later, a terracotta army of more than six thousand warriors guarding the tomb of the first Emperor, Qin Shi Huangdi (221-210 BCE), would be unearthed, did not escape the attention of its photographer. On 16 February 1914, the members of the Segalen Mission carried out measured drawings of the tumulus. The rich contents of the site stem from the practice of ritual burial still one of the fundamental bases of Chinese archeology and a fact which Segalen’s small band of archeologists brought to light.

Victor Segalen, a doctor, belonged to that early twentieth-century generation of enthusiastic world travelers. In 1909, he set out for Peking he called it « my capital » and spent more than four years there before returning to France in 1914 at the outbreak of war. The 1914 mission to China, during which this photograph was taken, pursued objectives of geographical and archeological interest and carried out a topographical survey of little-known regions.

In the course of the expedition, which he led along with Edouard Chavannes (1865-1918), Segalen complemented his written notes with sketches and photographs of monumental statuary. Revealing an innate sense of composition and lighting, he ranks as the most talented photographer of the twilight period of Imperial China. In his eyes, the Middle Kingdom became « the country that epitomizes harmonious difference, the diversity of the world in a nutshell… ». Yet Segalen, explorer and scholar, not only made important contributions to the field of archeology: he remains first and foremost a poet whose historical inspiration gave birth to literary creations such as The Son of Heaven and Stelae.