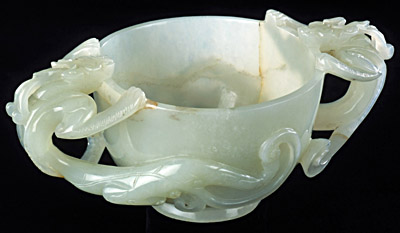 This extremely important piece, a circular cup mounted on a small, low base, is a testimony to Ming sculpture. The translucent white, veined jade gives sensuality to the decoration composed of two facing zhi dragons which form the handles. The dragons’snouts and paws grip the rim while the bodies arch outwards and the tails coil back onto the sides of the cup. Delicate carvings and engraved coils suggest the fur on the back and paws and indicate a certain pursuit of realism. The perfectly symmetrical, flowing and curving movement of the two dragon-handles creates a vibrant effect.

Jade is an extremely hard material that blunts most metal tools. Invariably, the secret of working this mineral consisted of grinding it with sand that was occasionally wetted, and called for tools such as saws, emery grindstones, and drills.

This type of archaic piece was intended for scholars’ chambers. Indeed, since the Song dynasty (960-1279), the preference of the elite for antique objects entailed the revival of jades along with an antique-style decorative repertoire such as the zhi dragon featured on Han dynasty (206 BCE – 220 CE) jades and this trend was to continue under the Ming. Clients, however, preferred novel flowing forms that highlighted the luminous veins running through the gemstones.

The Dehua potters, who first produced the celebrated Blanc de Chine so much sought after by Westerners in the 17th and 18th centuries, emulated the mannerist treatment of this cup. It bears witness to the European adoption of jade as a prestigious material since, having originally belonged to Cardinal Mazarin (1602-1661), it then appeared in Louis XIV’s collections.