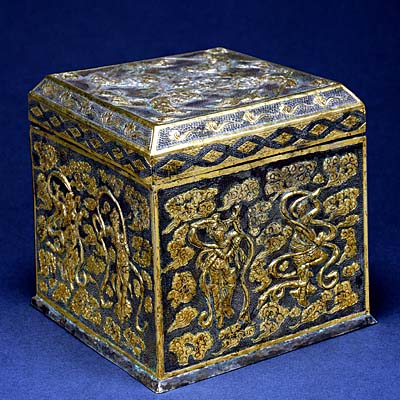 Esthetically, this cubical casket mounted on a low, flared base and with a bevel-edged lid shows similarities to objects from the Tang dynasty (618-907), in particular a series of Buddhist reliquaries from the Famen temple. The Tang influence is also found in the choice of images, such as the four repoussé figures of half-animal, half-human creatures, the flute-playing Kalavinka (female musicians or offering bearers) depicted on the lid. On the sides, the eight apsara dancing amid the clouds refer back to the iconography of buddhist paradise scenes, and are stylistically related to 9th century Dunhuang paintings. Along with this Buddhist repertoire animal motifs can be seen, including ducks, cranes, phoenix, deer and dragons.

The Liao did not seek to innovate in the area of iconographic repertoire, but instead identified with traditional values firmly rooted in Buddhism, the common unifying bond between the fifty-two tribes that ruled northern China.

This ancient people of nomadic horsemen who would adopt a settled way of life were impressed by the refined culture of Sung China. Their military power enabled them to conquer their huge neighbour on several occasions and to force the Chinese to pay them heavy tributes. It is still not possible to determine whether these objects were official tributes delivered by the Sung authorities, or commissions to Chinese gold and silversmiths working in Sung or Liao territory. This casket, however, bears two inscriptions, one of which enables the object to be dated 1024 and announces that it is destined for the “Office of Ceremonies of the Southern Court” and the “Principal Section of the Itinerant Palace”. This indicates that it belonged to the court, and at the same time reveals the attachment to nomadic traditions that prompted the emperor to be constantly on the move within his kingdom.