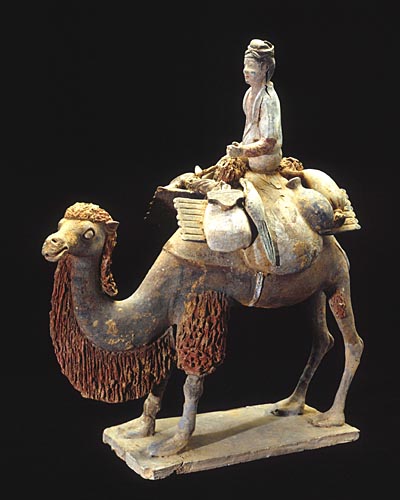 The sculptor’s treatment of the fur of this Bactriane camel is hyper-realist, a convention that first emerged towards the 6th century CE. Funerary camel figurines became increasingly common in China from the Northern Wei dynasty onwards, reaching their peak under the Tang. Although numerous specimens exist, representations of loaded and mounted animals are more rare. Moreover, certain objects depicted in this particular piece are very unusual.

The long boards of the packsaddle have first been fitted on each flank onto the oval saddlecloth. Two large tiger-skin bags containing merchandise, together with two other bags at the front no doubt holding the salt that was indispensable for long desert journeys have then been lashed on and attached to each other by a running line. Much less common features are the small, rigid bag perhaps a leather purse and the shao spoon with its long iron handle. The rather stout figure of the camel driver sits cross-legged, holding the reins (which have long since disappeared). His Central Asian costume lapelled tunic, trousers and in particular his front knotted turban suggest someone of Kuchean rather than Turfanian origin, despite the fact that other related figurines of camel drivers or grooms are typical of the latter region.

Although the Chinese themselves never ventured to mount camels, some bred them and hired the services of western drivers. The animal played a key role in transporting all kinds of exotic merchandise to the cities of Lanzhou, Chang’an and Luoyang, and was a tangible symbol of prosperity. It was probably for this reason that three-dimensional representations of camels accompanied the wealthy deceased in their final resting-place.