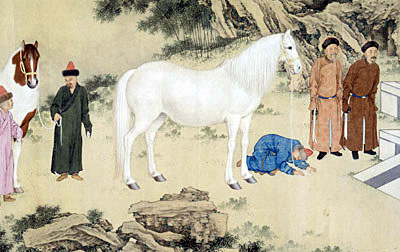 Kazaks offering horses in tribute to the Emperor Qianlong

This painting depicts Kazak envoys from the West offering a tribute of horses to the emperor Qianlong as a token of allegiance to the Manchu regime. The emperor, whose impassive features are treated with all the precision of a miniature, is seated on a podium in front of a screen, surrounded by a limited gathering of courtiers. The setting owes more to European pictorial technique than to Oriental Asian traditions. Indeed, the scroll cannot be interpreted as a series of sequences but rather as an integral whole, tending to optical illusion. The same applies to the Western realistic treatment of the horses -a subject in which Castiglione excelled- that seem all the more alive set against the stark, bare surroundings. The depiction of the horses is so accomplished that the gradation of brushstrokes is undetectable.

The handling of the landscape, rocks, trees and mosses is indisputably Chinese, based on incisive ink strokes heightened by coloring. The faces are rendered by means of small contrasting brushstrokes which create a prismatic light effect. This is a familiar Western technique, but used here on long and wavy-fibred paper studded with mica particles, it takes on a striking vividness.

Aware of the hostility of the Chinese, the Jesuits sought to propagate their faith but not to impose their culture. Accordingly, they strove to adapt themselves to indigenous customs. Such was the case of Castiglione, who adopted Chinese methods while maintaining a happy medium between Western and Oriental pictorial techniques. A privileged observer and man of synoptic mind, Castiglione succeeded in depicting the secrets of the Manchu court where ruse, submission and domination were expressed with tender humanity. This Musée Guimet scroll is one of the most priceless illustrations of an art which captivated Qianlong.