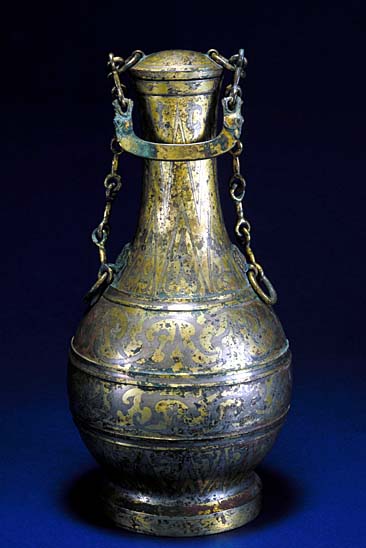 This slender, curved, pear-shaped bottle is made of gilded bronze. Its three horizontal layers of silver decoration depict mountains and clouds, symbols of the mythical world of the immortals who were believed to inhabit distant, mountainous islands and to fly through the vast expanses of heaven. This was a recurrent theme during the Han period, and very often as with the Mawangdui lacquered coffins the clouds and mountains teemed with fantastic beasts and beings. Given the relatively restrained decoration of this hu, it is therefore instead probably related to the generally more austere style found in regions of Northern China, although austerity was by no means incompatible with magnificence.

Early in the Han dynasty, the long-established technique of gilding with mercury amalgam was supplemented by that of applying silver in the same way. Combining the two techniques created a pleasant contrast of colors, and when such a combination occurred it seems the first preference was for gilt decoration on a silver background. The alternative procedure appeared slightly later. For this reason, the Musée Guimet hu dates from no earlier than the 2nd century BCE. A six-link suspension chain is attached to the horse head-shaped extremities of the handle. An inscription under the base reads: “Gold and silver painted hu vase, capacity 2 bushels, weight with lid 11 pounds and 4 ounces, (property) of the Guanyi family”. Hu with suspension chains appeared in the 6th century BCE, apparently inspired by nomadic lifestyle. The hu MA1076 is one of the last models of brass wine vessels. These were soon to be replaced by polychrome pottery Hu that were both cheaper and more suitable for use as funerary artifacts to replace the obsolete ritual bronze vessels.