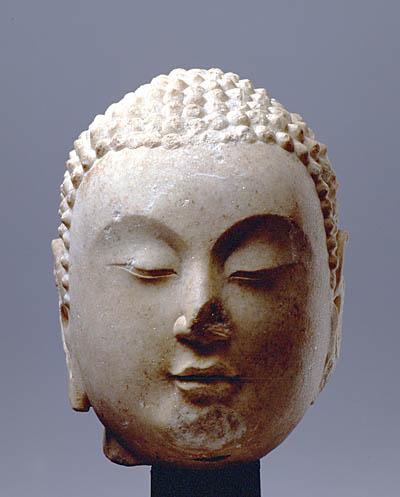 This round, almost spherical head of Buddha -the face dignified and grave, displaying a detached serenity conferred by the smooth modeling and plain, unadorned features- is characteristic of the art of the Northern Qi dynasty where this kind of flowing relief became more pronounced. The small, regular curls of the hair are a sign of the Indian Gupta convention regarding effigies of the Enlightened One. Nevertheless, the Chinese contribution is apparent in the curving form and the profound sense of spirituality radiating from the face. The latter, skillfully executed in mica-tinted Hebei marble, displays a harmony typical of the period emphasized by the sinuous eye slits that are carved in accordance with the original 6th-century Chinese canon.

From the mid 6th century, the stylized sculpture of the Wei (386-534) periods evolved under the domination of the following dynasty towards a mastery of modeling and a concern to achieve more human representations. As a result of increased knowledge of the canonical texts, the Buddhist world of Upper Asia became more unified; the norms of the ideal canon of representation of the Indian, Gandharian and Central Asian Buddha reached China.

This work reflects a transient stage in which the legacy of the older visual approach held out against the powerful new Indian influences. Later, a more flexible and accurate acceptation of the common canon emerged under the late Sui (577-618), to be subsequently embodied by Tang (618-907) « classicism ».