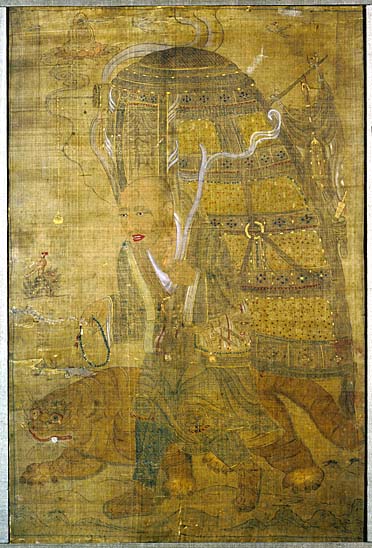 This painting depicts a stereotyped image widespread throughout China, the Far East and Tibet: that of a missionary monk with pronounced features-the way the Chinese imagined foreigners-weighed down by Buddhist texts. From his load rise mystical clouds within which appears the image of a meditating Buddha. In these icons, a vigilant tiger that leads the way always accompanies the monk. The subject is a pretext for a description of monastic attributes. In this painting we can see the rosary that the monk is counting, his knotty staff and his missionary effects: medicine box, small knives fastened to his belt, fly-whisk, phial, a banner hooked to a pole on the back of his basket, and a little censer dangling at face level. The wayfarer is travelling through an arid, rocky landscape reminiscent of tracks in the Serindian desert. In the background, a bird perched on a rock adds a poetic note. Although the enigmatic figure epitomizes a type rather than referring to any specific individual, the picture nevertheless possesses the distinctiveness of a religious work based on the « portrait » of a monk.

The pictorial technique is resolutely Chinese: monochrome ink with light washes of colors embellished with gold-leaf highlights, the purpose of which is to render the design more discernible.

Despite the absence of any donor’s dedication, the votive nature of the composition seems obvious. Of all the painted themes found at Dunhuang, that of the wayfaring monk with his load of books and accompanying tiger most explicitly represents the arrival of Buddhism in the Far East from India via Central Asia. Centered on monastic activity, however, the iconography relating the spread of the Buddhist faith tends to overlook the crucial role played by the merchants who plied the Silk Road.