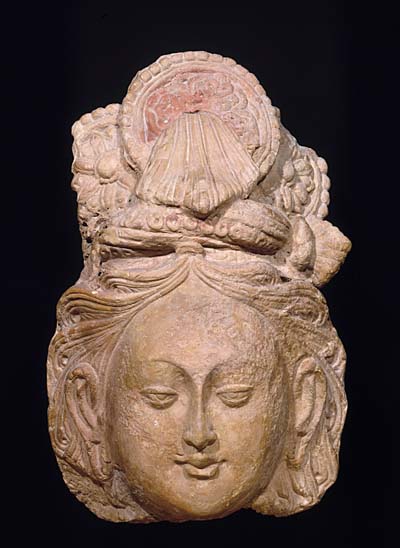 Elongated locks of hair, which provide a touch of decorative naturalism, frame this bodhisattva head. It is topped by a tiara formed from three medallions with ornamental pearl borders. Two of the medallions have lotus-flower rosace motifs while the third features a floral decoration reminiscent of some the motifs found in Gupta halos. Such tiaras, introduced from Gandhara and India, were widespread in the oases of the Tarim Basin (Chinese Turkestan). Here, the facial features are typical of a late period, and are more elaborately stylized than in earlier periods, emphasizing the pure, almost circular « moon-faced » oval shape. The bridge of the nose is also more angular and pronounced, the eyeballs more protruding, while the arches of the eyebrows are much less prominent on the brow. Although the skillfully modeled mouth has been reduced in scale, it still expresses an ecstatic half smile in true keeping with the traditional iconography of the figure. Destined to achieve great popularity in Serindia, this new style was less concerned with anatomical accuracy than with a visual formalism appropriate to a more expressive rendering of a bodhisattva’s idealized features.

The use of casts, introduced from Gandhara, allowed the addition of individually distinctive hairstyles and ornament; nevertheless the finishing touches to such figures were carried out by hand.

This type of bodhisattva head may be considered to have belonged to a group of religious statues framing Buddha whose head has been discovered. The vestiges of three plinths substantiate the hypothesis of a triad. The piece comes from the Toqquz Sarai monastery in Xinjiang, the major Western Serindian Buddhist center in the kingdom of Kucha on the Northern Silk Road. From the 1st century CE, Buddhist missionaries traveled along these trade routes converting the Indo-European peoples of the Tarim Basin and bringing with them Greco-Buddhist art.

This face, with its straight nose, clearly carved eyes, and wavy moustache is gently oval-shaped in North West Indian style, displaying the influence of Hellenistic traditions under the great Kushan rulers. Despite the urna on the forehead, the Indian-style bejewelled ears feature a lion motif, indicating that the face is that of a secular figure.

This has led researchers to suppose that such bodhisattvas and there are very many of them occasionally represented local sovereigns. This impression is reinforced by the naturally wavy hair which is gathered into a chignon on top of the head, and held in place by large jewels and a rectangular cabochon on the forehead attached by beaded cords. Although the head is considered to be in the « Greco-Buddhist » style, it nevertheless appears Indian. The Western influences with their Hellenistic realism have been integrated into a new art where the rather languid charms of an effeminate grace conjure up Northern or even Iranian origins.

The head must have belonged to a statue of a standing bodisattva of the type that were found in the niches of Buddhist chapels and monasteries. The Gandhara style, a key factor in the propagation of Buddhism in Central Asia, flourished under the Kushan dynasty, during whose reign the earliest humanized images of Buddha appeared.

These attested to theological developments that revealed a new spiritual need for devotional images and led to the emergence of Mahayana Buddhism which was to spread, exporting the Gandhâra style, along the Silk Road to the Far East.