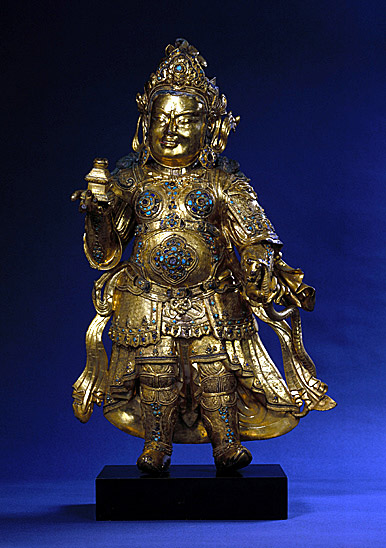 This statuette represents Virupaksa, Guardian of the West, one of the four kings who stood guard over the four cardinal points of the universe. These guardian-kings, or lokapala, are always portrayed in armour. The attributes of this figure are a reliquary stupa -previously carried by Vaisrana, Guardian of the North- and a snake. Despite the visible canine teeth, the face is smiling and pleasant. Certain technical and stylistic details link this piece with South Tibetan lokapala featured on stupas which were in all likelihood built between 1350 and 1550. Tibetan representations of the guardian-kings display strong Chinese influences, such as the armour worn by this figure and which is a variation of suits of armor dating from the Tang dynasty (618-907).

This pure copper piece was cast using the lost wax technique, which allowed for an exceptional treatment of the floating scarves, the snake, and the hands. After gilding, the statuette was embellished in a typically Tibetan fashion with an inlaid lapis lazuli, turquoise, coral pink, and red decoration. The use of polychromy is visible in traces remaining on the lips and hair.

The work belongs to the tradition of esoteric (Vajrayana) Buddhism that characterized local culture. It illustrates the decisive influence of China, reminiscent of the period when the latter country maintained special links with Tibet, which was responsible for religious affairs throughout the 14th century Mongol Empire.