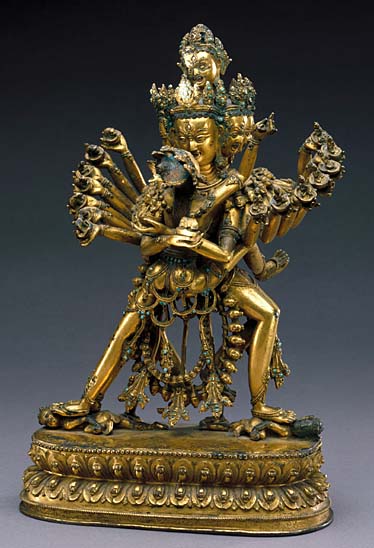 These two figures represent the deity Hevajra in his Kapaladhara manifestation -with eight ferocious heads, sixteen arms and four legs- embracing his female consort Nairatmya. With his forelegs, the god is trampling on two figures of Mara, a Hindu demon, while his hind legs execute a dance step in front of two other Maras seated in adoration. Nairatmya is brandishing a cleaver and a skull cup; Hevajra is holding similar recipients in his multiple arms, each of which contains either animals or Hindu deities seated in prayer. The elongated proportions of the figures, the supple contour, and the numerous inlays and jewels all reveal a Nepalese influence, or more precisely that of the Kathmandu valley Newars . This influence is also visible in the sense of movement, the slender proportions, the flexible modelling, and the numerous inlays and jewels. On the other hand, details such as the finials in the upper part of the armbands, and the garlands of human heads, are typical of the art of Tibet, a country where esoteric compositions of this type often included rather ferocious multiple heads and limbs.

The statuette was cast using the cire perdue technique and belongs to Buddhist culture for which Tibet has remained famous. Among features common to Nepal and Tibet was the stylized evocation of sexual congress between two deities, the male figure representing salvation, the female wisdom, and their sexual union symbolizing emancipation.

The piece dates from a period dominated by the Prefects of Rin-sprungs (1435-1565), who built monumental complexes such as the Rgyal-rtse in Southern Tibet. It illustrates the emergence of a characteristically indigenous art form that combines influences from Nepal, Pala India (8th-11th centuries), and also China.